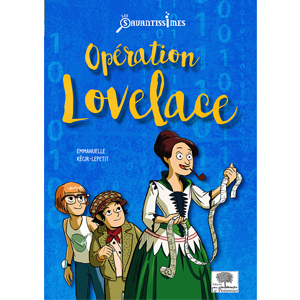 Winter 2025: a major virus has infected all of the western world’s computer systems. Nothing works anymore. At the Pentagon, a team of experts from across the globe has been assembled to find a solution, led by Professor Holmes. According to him, there is only one possible solution: go back in time and fix the problem at its root by preventing the invention of computer technology, the source of all their troubles. Lovelace, a top-secret US Department of Defense program, would allow them to travel back in time to the year 1943, to the University of Philadelphia where the first computer was built. After traveling through the time-space continuum, 12-year-old Nancy finds herself in London in July of 1843. The time machine was off by 100 years! There, she meets another child named Olivier, along with Ada Lovelace, a pioneer of computer programming, plus Charles Babbage, the inventor of the difference engine. Plenty adventure in both the past and the future await these two kids, and along the way, they will discover the life and work of Ada Lovelace, a skilled mathematician and the world’s first computer programmer, long before the discipline was born in the mid-20th century.